HomeSportsNo Keeper in the world can save your goal - legend Rio...
Sports 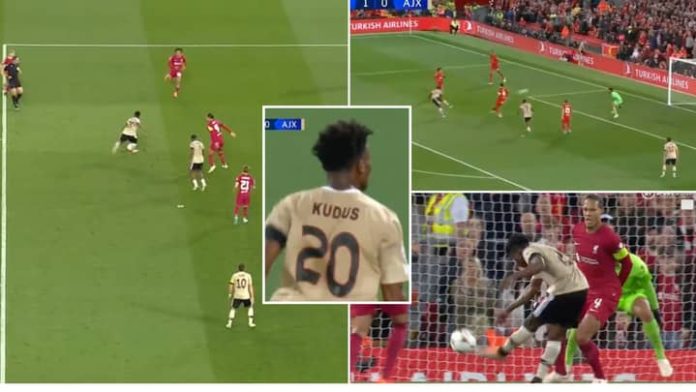 No matter their team or league, goalkeepers cannot stop the goal, in Rio Ferdinand’s opinion.

“What a heartbreaking conclusion. Nobody in the world can keep that.

Definitely not a keeper! Speaking on BT Sports, Ferdi.

Ajax’s Kudus Mohammed pulled them even during their match against Liverpool at Anfield.

Ajax’s Mohammed Kudus celebrates getting the equaliser against Liverpool to make the final score 1-1.

Mohammed Salah’s goal for Liverpool was negated by his goal. Following the opponent’s lead, it took Kudus Mohammed eleven minutes to bring the score back to level.

In the first half, Kudus Mohammed, who was positioned like a striker, raced in the direction of the ball.

The crucial player positioned himself near goal while his teammates advanced, receiving a pass in the box.

Mohammed turned around and sent his left foot into the goal. Alisson Becker, the goalkeeper, stretched too far but was unable to stop Kudus Mohammed from scoring.

Kudus Mohammed has been on the score sheet for Ajax in their last four matches across all competitions.