HomeEntertainment‘I don’t care if you direct my music lyrics to Stoneboy, will...
Entertainment

‘I don’t care if you direct my music lyrics to Stoneboy, will continue to write more songs’ – Kelvyn Boy

Speaking in an exclusive interview with Amansan Krakye on Radio Central, the singer stated that, because he had issues which led to his exit from the Bhimnation Label, people always directs songs he had written to his Former boss. 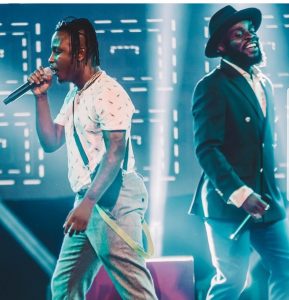 He continued, “What would people had said if I had released my song “Yawa No Dey” under the Bhim Label?’ he questioned. “In terms of business, the release of the song was the right time for that, which was never a diss song to anybody”, he said.

“I don’t care if you direct my music lyrics to Stoneboy, I will continue to write more songs for my fans’ he said.

When he was asked by the host which kind of Role his former manager Black Cedi is playing in his career now, he said, he sees him as his senior brother.