HomeEntertainmentPatapaa tells how a friend Poison him two weeks ago, Confirms 2018...
Entertainment

Patapaa tells how a friend Poison him two weeks ago, Confirms 2018 Eagle’s Prophet ‘Poison prophecy’ about him (Video) 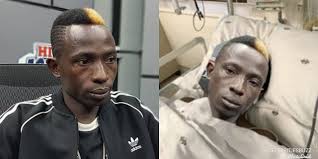 Founder and General Overseer of God’s Crown Chapel, Prophet Reindolph Oduro Gyebi popularly known as Eagle Prophet at his December 31st All Night Service, in 2018, revealed that Patapaa will be poisoned in 2019 by people close to him.

According to the prophet, he saw in a vision that Patapaa would die before 2019 ends. He advised that the ‘One Corner’ hitmaker should be very prayerful so as to avert the curse and also be careful of those close to him if he wants to live and welcome 2020.

His prophecy which was widely condemned by many social media users and some celebrities has come to pass.

In an interview on Okay FM, Patapaa has confirmed that he was poisoned two weeks ago, after a performance in Tarkwa.

Narrating his ordeal in Twi, the singer said “What happened to me was scary, that’s why I dropped a song titled “Eye Hu” … I was poisoned about two weeks ago, and that I was vomiting something black. When I go to the toilet, I see blood. By then I was in Tarkwa where I was booked for a series of shows”.

A pale and skinny looking Patapaa advised that, whenever men of God make such prophecies, it should be taken seriously because men as mere mortals do not have spiritual eyes as the prophets.

Watch more in the interview monitored by Ghanaweb below: