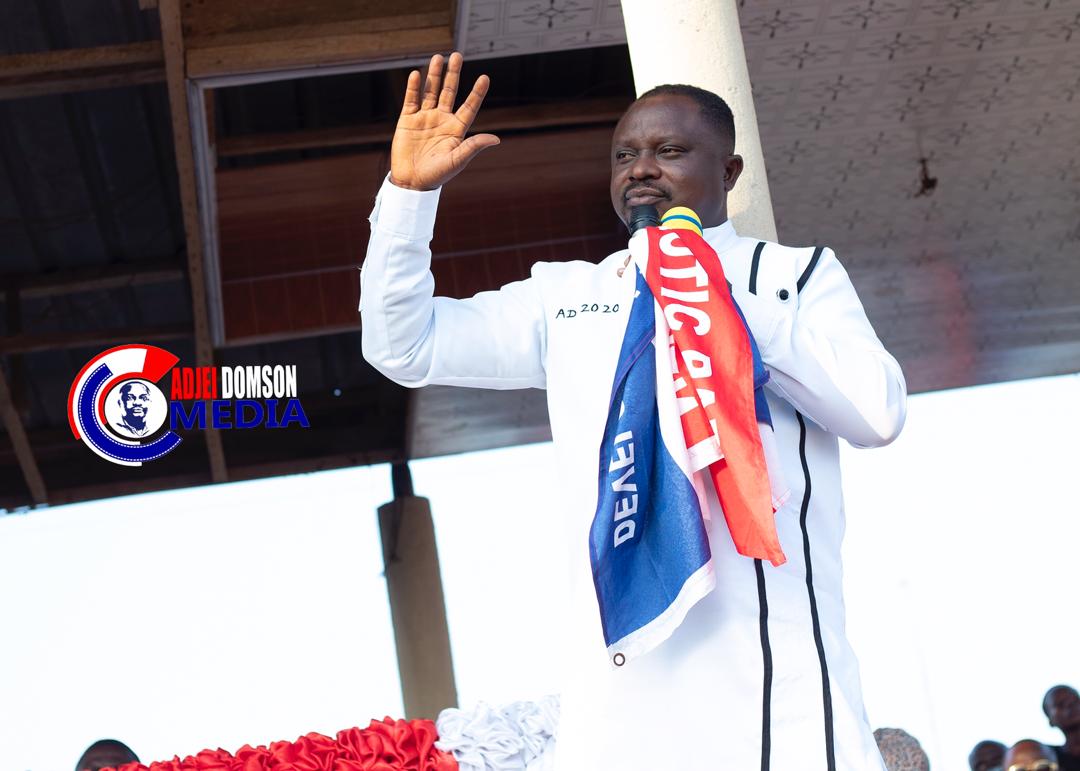 The Parliamentary Candidate of the ruling New Patriotic Party in the Asikuma Odoben Brakwa Constituency, Honorable Emmanuel Adjei Domson on Sunday, 2nd August, 2020, together with his hardworking constituency executives and campaign team paid a courtesy visit to citizens of Agona Odoben Township where he officially introduced himself to electorates and also solicited for their votes in the forthcoming December 7 General Elections.

The vibrant Parliamentary Candidate and most Outstanding Former District Chief Executive during his visit to Odoben received warm reception from the inhabitants with massive turn out.

When addressing Chiefs, Queen Mothers, Elders, Opinion Leaders and audience, Honourable Adjei Domson briefly reviewed his unprecedented projects and achievements he saw to their implementation in Agona Odoben during his tenure in office as DCE from 2005 to 2008 when he worked under Hon. P.C. Appiah Ofori.

During his speech, Hon. Adjei Domson laid emphasis on the construction of all major roads within Agona Odoben Township, the building of Odoben Islamic, D/A, Roman Catholic and Presbyterian School Blocks and the expansion of Odoben Senior High School and Odoben Health Center and construction of Odoben Durbar Grounds which gave the town a facelift.

Honorable Adjei Domson assured the people of Odoben that, when elected as Member of Parliament, he will build fifteen (15) Teachers Bungalows for Odoben Senior high school to serve as residence for teachers on campus in order to solve the accommodation problems teachers face in the town.
Honorable Adjei Domson promised that, he will begin the construction of the Bungalows with 500 bags of cement in his first month when elected into office.

The able Parliamentary Candidate stated emphatically that, the construction of the teachers bungalows will not be awarded to any contractor but he will liaise with Odoben Development Committee to engage Maisons, Carpenters, Plumbers, Labourers, Electricians and other construction workers to build these bungalows.

Also, Honorable Adjei Domson made a great promise to Agona Odoben that, he will expand Odoben Health Center and build Nurses Quarters for Nurses who are posted to the town to work who face accommodation problems.
He also donated cash to a carpenter to see to completion of Odoben Durbar grounds ceilings where the meeting was held.

Honorable Emmanuel Adjei Domson having served as a former DCE under the erstwhile Hon. P.C.Appiah Ofori Administration, is known to be the most Outstanding District Chief Executive of Asikuma Odoben Brakwa District with numerous achievements before and after any other DCE.

He has been endorsed by many constituents as the next Member of parliament to help rebrand and transform Asikuma Odoben Brakwa Constituency.

Share
Facebook
Twitter
Pinterest
WhatsApp
Previous article
Most Ghanaian female Celebrities Envy & Disregard Me Due to What Fame Has made me Today – Akuapim Poloo Brags
Next article
Nyce 90.7 FM acknowledged as one of the best radio station in C/R.