The most anticipated great banger titled ‘By Force” by the top notch female Vocalist and Songstress, widely known as Ateaa Tina, is finally out.

The Song features Versatile Rapper Okyeame Okyeame the Rap Doctor , and was produced by the Highly Spiritual music ( Kaywa) , in which the video for the said song was directed by Rex.

By Force Song is the first official single release announcement from her camp, and was scheduled to be released on all streaming plateforms on Wednesday, May 5, 2021.

‘By Force’ song is a massive piece with a wonderful singing verses by Ateaa Tina, with Okyeame Kwame adding up his back to back rap powers to the song.

The song is a highlife afropop jam, and it has started recieving massive airplay across the country. 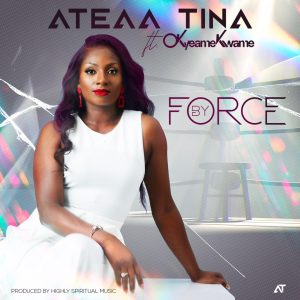 Ateaa Tina has been in the Ghanaian Music Industry since 2003, in which she collaborated with Daddy Lumba to release his album like “Bubra”, which contained hits such as “Pony”, “Adaka Tea” and “Dada Kae”.

In all, she has worked with Lumba on five albums: “Mema Afa Wotrim Ne”, “Bubra”, “Odo Bewu Dee”, “Ahenfo Kyiniye”, and “Give Peace a Chance”. This dope song is said to be her first massive song from her upcoming album.