Kidi Storms his town Abetifi with Kuami Eugene, King Promise & Others for his free “Sugar Carnival

Talented singer and performer known as Kidi, signed under the Lynx Entertainment Label, has done very by giving back to the town he hails from called Abetifi, in the Eastern part of the country, with dope Concert headlined by G hanian mainstream artistes.

Few weeks ago, Kidi together with his management pledged to flood his hometown with the major headline artistes for his Sugar Carnival. 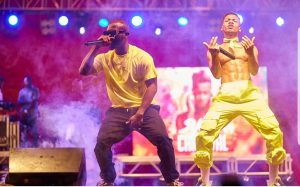 Click on the link below to watch videos from the said event: