HomeEntertainmentJohn Mahama had a conversation with me after 'Papa no' saga –...
Entertainment 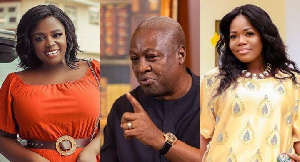 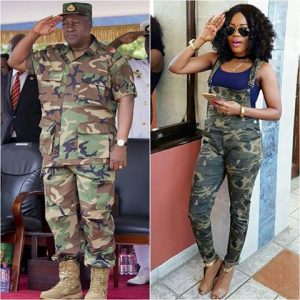 The musician, Mzbel has disclosed that, the former president, John Dramani Mahama has had a conversation with her as regards the altercation with actress and film producer Tracey Boakye.

The 40-year-old singer mentioned in an interview that, Mr. Mahama advised her but was tight-lipped when asked about details of her interaction with the presidential candidate of the National Democratic Congress (NDC).

“He has advised me. I’ve heeded to his counsel and that’s why I’ve said, I won’t post anything NDC on my page,” she remarked in local dialect Twi. “And I believe I’m not the only person he’s spoken to; I believe he’s spoken to a lot of people who are involved in this issue.”

According to Mzbel, the controversies associated with her brand appear to be affecting the NDC hence her decision to not post anything associated with the party on her social media platforms again.

“I’m worried,” she responded when asked if she thinks her banter with Tracey Boakye is making the NDC look bad. “That is why I’ve decided not to post anything NDC on my page because it will attract a lot of insults. So, the best I can do for my party is to stay out. If I’m to do something, I’ll execute it behind the scenes.”

The musician, in casual apparel with a headgear and sunglasses to match, continued: “There are some prominent people who admired both of us. They are disappointed that, even if there had to be this scuffle, the timing is wrong. It gets me worried.”

It would be recalled that, the Film Producers Association of Ghana (FIPAG) suspended Tracey Boakye after she feuded with Mzbel. The actress who is also known to be a supporter of Mahama had in series of video clips launched scathing attacks on Mzbel over their relationship with a married man.

Speculations were rife ‘the man’ [translated in Twi as ‘papa no’] at the center of the controversy was a former president but Mzbel says her preference cannot be same as Tracey’s.

“Honestly, I have no idea the kind of man Tracey Boakye is talking about,” Mzbel said in an interview. “The men I dated are not her type and I wonder why she would say she has snatched my boyfriend from me.”

“My man likes slim ladies and she is not slim. If she claims she has taken over my boyfriend who provides everything for her why is she still not okay but is saying things that I have no idea about?” a puzzled Mzbel asked.